UFOs Over Campeche, Mexico: Official!
To view the movies you will need RealPlayer. Click the RealPlayer banner above to download the program.

Mexico’s standing as the world’s premiere UFO location has received a substantial boost this year.  The country is known for its multitudinous fleets of spherical UFOs that hang over cities, attracting the eye of many a camcorder owner. Some stunning footage has resulted, in particular various films shot in the early to mid-nineties over Mexico City. 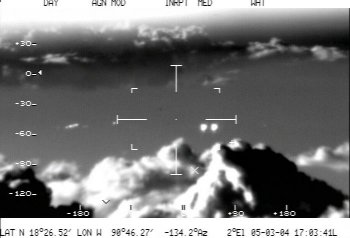 To this can now be added official radar and infra-red imagery taken by military personnel aboard a reconnaissance plane on 5th March 2004 operating at 11,000 ft.

The incident occurred over Ciudad del Carmen located in the eastern coastal state of Campeche. It involved a Mexican Air Force Merlin C26A sweeping the local airspace for drug smugglers (1).  Its on-board infra-red and radar instruments picked up a single trace initially, which was promptly investigated to ascertain whether it belonged to an aircraft that might be carrying narcotics.  The Merlin is a reconnaissance plane, and not an interceptor, so it would have needed to have called in Mexican Air Force interceptor support if the trace proved to be suspicious.

However, the crew could not make a visual confirmation of the object clearly shown on their instruments.  The object seemed real enough, though, and promptly evaded the Merlin at high speed.  To their surprise, it returned, but was now accompanied by another object.  The crew started to get stressed by this unusual situation, and were in constant contact with their ground control during the incident, resulting in some interesting quotes on the subsequent official audio recording:

"We are not alone!" shrieked one over the howl of the aircraft's turbines. "This is so weird." (2)

Invisible UFOs
Despite their efforts to get closer to the objects, the crew simply couldn’t see them.  They seemed to be invisible, but simultaneously detectable on both radar and infra-red (which precludes the possibility that this incident could be put down to a faulty instrument).

As the crew of the Merlin manoeuvred their plane to bring the 2 objects into clear visual contact, their instruments suddenly showed another nine objects, bringing the total to 11.  None of these objects could be seen, and it was unclear as to where they had come from. This was an unprecedented situation for the crew, and a potentially dangerous one as well.  The captain asked his base flight controllers for orders, but before long the Merlin was literally surrounded in a circle by the 11 invisible objects, which were approximately 2 miles distant at this point. Was the hunter about to become the hunted? At this point, the captain, Mayor Magdaleno Jasso, turned off the aircraft’s lights and the crew sat tight awaiting whatever bizarre turn of events might occur next.

Major Magdaleno Castanon said: "There was a moment when ... the screens showed they were behind us, to the left and in front of us. It was at that point that I felt a bit tense." (2)

In the meantime, they continued to detect the objects, and record the data from their instruments, despite not being able to see the objects visibly. The 11 UFOs then disappeared from their instruments, much to the relief of the startled and bemused crew on board the Merlin.  They returned to base and filed a report complete with a full record of their instrument data and flight recordings.  The Mexican Air Force subsequently launched an investigation, which came to the attention of the Mexican Secretary of Defence General Clemente Vega Garcia.  He has since personally confirmed the veracity of the report (3).

And there one would normally expect such as UFO report to finish up; collecting dust in a military intelligence archive after cursory examination by a disinterested office-bound bureaucrat.   However, the Secretary of Defence was so puzzled by this report from his air force that he took the unprecedented step of contacting one of the world’s premier UFO investigators and broadcasters, Jaime Maussan.  Such official involvement with a researcher known for his sympathies for the extra-terrestrial hypothesis is almost as remarkable as the actual incident itself.  The public release of the complete story on 9th May 2004, along with the uncensored testimonial and instrumental records of this event, is in marked contrast to the utter disregard usually meted out by officialdom towards unsolved UFO cases, even those involving trained observers in the military.

One wonders what political motivation lies behind such a move, but nevertheless it certainly allowed the story to break into the mainstream news media, and that must have been an intended outcome of involving such a well-established broadcaster as Jaime Maussan.

Reuters quickly picked up the story of the news release and produced a small article outlining the barebones of the case (4).  They interspersed the news item with potentially discrediting commentary about Jaime Maussan  (“a long-time believer in flying saucers”) and Mexico’s “long history of fanciful UFO sightings”.  This is standard debunking fayre, clearly aimed at appealing to the reader’s dogged scepticism.  The very same phrases then appeared in newspaper reports (e.g. ref. 2), which were evidently based upon the Reuters item, as well as news features broadcast on Mexican television.

Of course, this is how the Media deals with the UFO subject.  No need to check out the story directly when Reuters have already produced a perfectly adequate, generally sceptical précis for general consumption among bored broadsheet hacks.  UFOs don’t exist, broadsheet journalists undoubtedly muse, except in the tawdry pages of populist tabloid copy.  So there would be no point looking into it any further, would there?

This is unfortunate, because this case offers many fascinating elements ripe for investigation.  The UFOs were recorded on 2 separate instruments.

The event involved multiple qualified military observers who should have been able to make visual sightings of the UFOs, and inexplicably couldn’t.  There is an audio recording of the event, and testimonials from the captain and crew. And, most remarkably, the Mexican government allowed all of this to be released into the public domain, managed by, of all people, an established Ufologist.

One might expect more than the odd raised eyebrow at The Independent, perhaps.  No matter.  What’s important is that the Campeche Incident is on record and is self-evidently mysterious.  To be fair, this sense of genuine mystery was portrayed by Tim Utton, the Science Reporter for the Daily Mail (5), but his open-mindedness seems the exception to the rule.  However, the incident is not likely to convince actual scientists of the existence of UFOs, one suspects.  In fact, it has already attracted some of the most bilious attempts at debunking UFOs since the notorious ‘swamp gas’ theories:

Julio Herrera, a nuclear science researcher at the National Autonomous University, said the bright blurs could have been caused by electrical flashes emitted spontaneously by the atmosphere.

"They are very strange phenomenon and there is little information about them," Herrera said of the atmospheric flashes in a phone interview. "That's what's so interesting."

He said more data than is available on the videotape would be necessary to determine if that hypothesis was correct, including precise information on atmospheric conditions at the time the lights appeared. (6)

Other theories will no doubt emerge as well, (weather balloons, ball lightning, meteors) equally self-righteous in their determination to tread the conventional path, and equally wide of the mark.  Such a well-recorded case requires a snappy resolution by those who cannot countenance the possibility of a contemporary UFO report becoming a cause célèbre amongst the public at large.  But I suspect the case will defy a rational explanation, and remain unsolved.  The aero-dynamics of the objects alone suggest intelligence, not to mention their ability to appear and disappear suddenly, yet their invisibility appears beyond our technological means at present (one presumes).

Personally, I wonder whether the motivation of the Mexican military to release this information into the public domain in this way is aimed at creating embarrassment in certain quarters, namely the US military.  Is the Campeche Incident the first official example of UFO defence significance?  It seems so, providing Ufology with a very worthwhile precedent.