How to make a webcam
work in infrared

This handy guide, written by the guys at http://www.hoagieshouse.com/IR/ explains how to convert your webcam to see the infrared spectrum, which is ideal for seeing ghosts, UFOs etc.

Disclaimer: We have converted our own webcam and have found that this does work. However, we do not claim any responsibility for other people who may break their cameras whilst carrying out this conversion.

The camera used for this experiment was a Sweex USB Webcam this camera was chosen for it's price and availability. As an added bonus, but nothing to do with this project, this camera works fine under Linux with a 2.6 Kernel using the sonixcam driver from here.

Remove the plastic stand - try not to lose the little rubber bits from the holes in the camera sides. I think they are supposed to stop it from tilting upwards under the weight of the wire. Shame they don't work really.

Remove the screws. If your chosen webcam is held together in some other way you'll have to figure it out yourself.

If the Lens will not unscrew without removing the PCB (Like on the Sweex) then remove the PCB. It probably only slides in anyway.

Unscrew the lens assembly from it's holder. The focus on most webcams is achieved using the screw thread that is also used to hold the lens in. Turning it enough times will unscrew it completely. All camera's I've ever met won't let you do this without opening the case. The bit that comes out of the sweex looks like this. 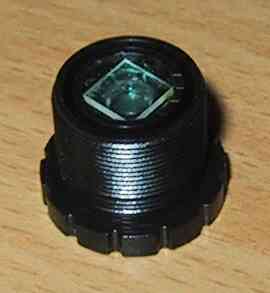 Looking at the lens assembly in the picture you can see a small square of glass stuck in the back. Though it appears clear in the picture above, it has a red tint to the eye as shown here.

I've looked in a Creative camera and seen the same thing there but theirs is round. This piece of glass is the Infra Red Filter. It stops IR light getting through to the sensor. For our purpose this is bad so remove this piece of glass. Removing a square one like the Sweex is easy but I suspect the creative round one is harder.

Mitch White has this to say on the Alaris weeCam ...the filter is actually "painted" on one of the lenses. At first I thought I wouldn't be able to remove the filter, but I tried scratching at it with my fingernail, and it started to come off! So, after scratching off all the redish stuff, I reassembled the camera and it works perfectly!

Ken R has converted a Creative camera though not the same as mine. Click here for his instructions on adapting the lens assembly.

Newer Sweex models and many others have a lens design with a cross section like this.

On here, the red is the IR filter, the green bit on here is a small plastic collar that holds things together. It looks at first glace like the same piece of plastic as the main lens holder assembly. This can be removed by levering it out with a sharp knife. This collar can be used to hold the new IR pass filter in place later.

Step 7 (Not at all sweex specific)

Now we need to make a new filter only we want one that blocks visible light and only lets IR through.
Dig out your holiday snaps and look at the negatives. NOTE: they must be colour negatives, black and white ones won't work. Find a bit of absolute black, you can usually find a bit before the real photo's start. Make sure it's really black, a part of a normal photo may not be good enough.
Cut two small bits out similar in size to the IR filter that you just removed. 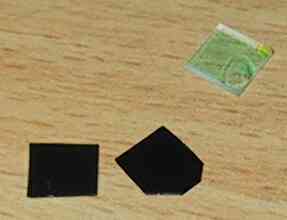 Step 8 (Also not at all sweex specific)

Fit the two bits of film where the old filter was. 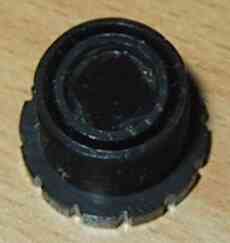 Step 9 (No idea if it's Sweex specific)

Do something to hold the bits of film in place. I used a little bit of wire as shown rather blurredly here. If you use superglue for this be careful not to get any on the actual lens or the part of the negatives that the IR light will pass through. 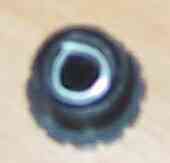 Step 10 (I'm getting fed up of saying whether it's Sweex specific or not.)

Screw the lens back into the camera PCB.

Re-assemble the rest of the camera.

Start up the webcam.

Here's a few I prepared earlier 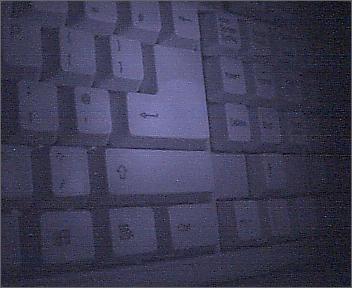 My Keyboard lit only by a TV remote control. 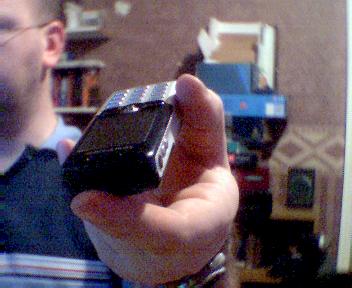 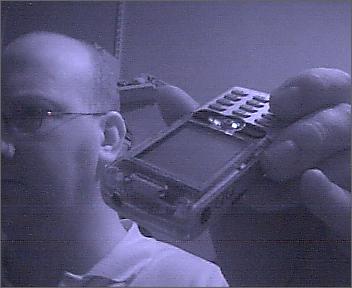 The same phone in IR. 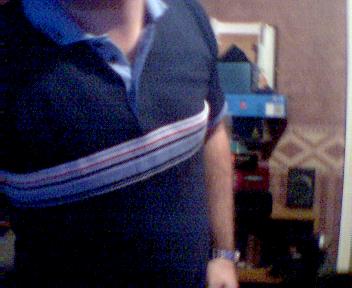 A polo shirt with a normal webcam. 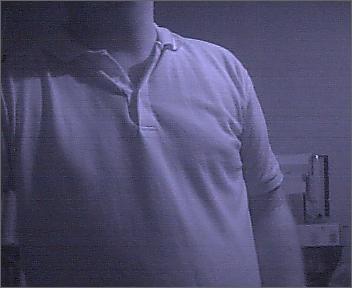 The same polo shirt with the IR webcam. 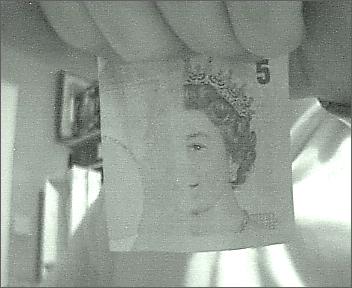 An English five pound note in IR. For any non-uk people, the queen's face is not cut in half to the naked eye.
Mariusm has hacked a Logitech QuickCam Pro 4000 and posted a picture of some American money. Click here to see it. 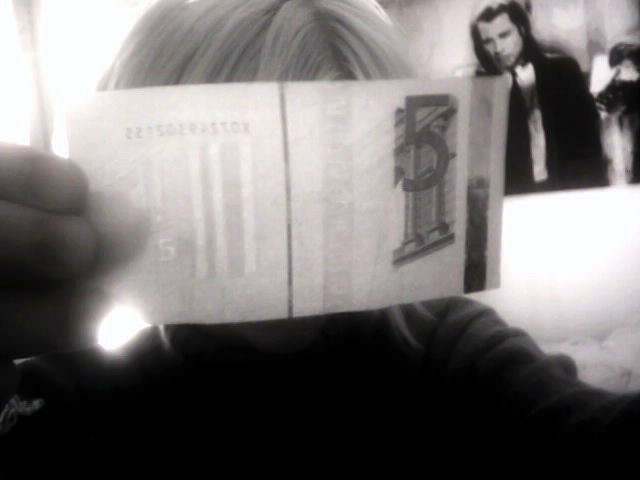 Moses Holmström sent me this picture of a 5 Euro note 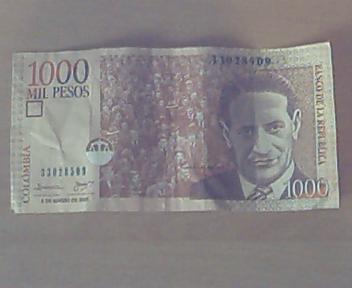 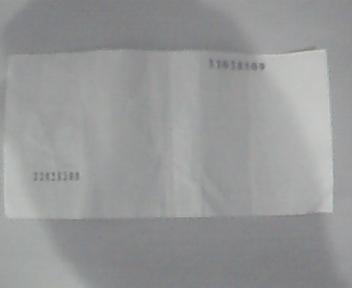 In Colombia they take it to the extreme. 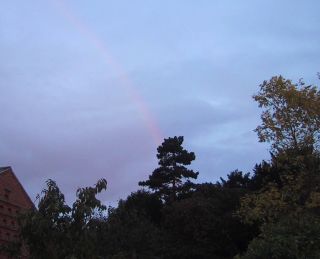 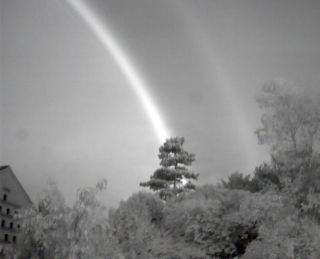 I tried to get these two shots from exactly the same place. The rainbow is barely visible to the normal camera, on the IR one it's big, bright and just outside the line of the visible one. A second rainbow on the IR shot is also clearly visible. 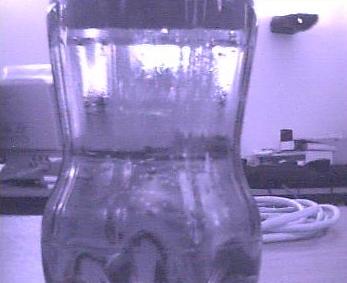 A bottle of Coke in Infra Red is pretty much transparent. 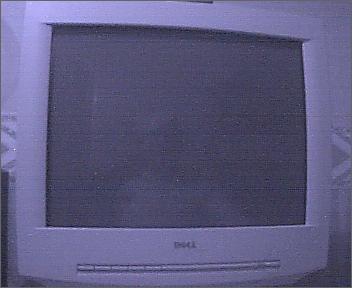 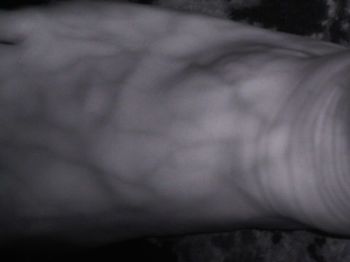 Veins show up well in IR.

A normal picture of the lake at Tollerton Hall. 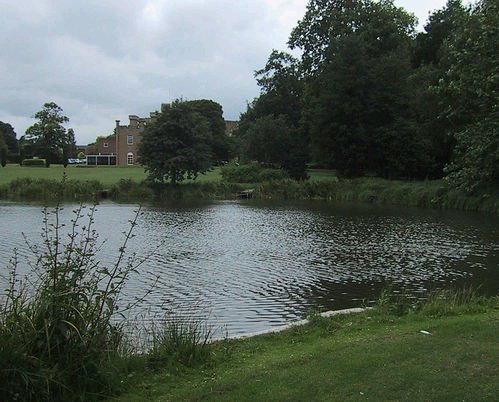 One day later and in IR. 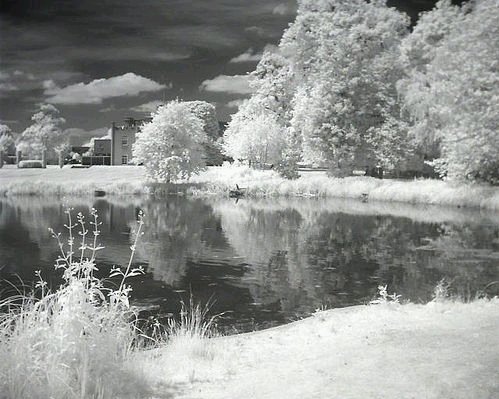 The top of this image shows the spectral response of an unmodified digital camera, below is the response of the IR modified camera. This image was taken using a CD as a diffraction grating and a tungsten bulb as the light source. Thought the method was not very scientific and the accuracy may be suspect, it gives some indication of the efficiency of film as an IR filter.

Yigit Guler has made a very detailed page about hacking some Sony camera phones.

Peter has an IR camera spying on his cat's hideaway.

Disclaimer: We have converted our own webcam and have found that this does work. However, we do not claim any responsibility for other people who may break their cameras whilst carrying out this conversion.